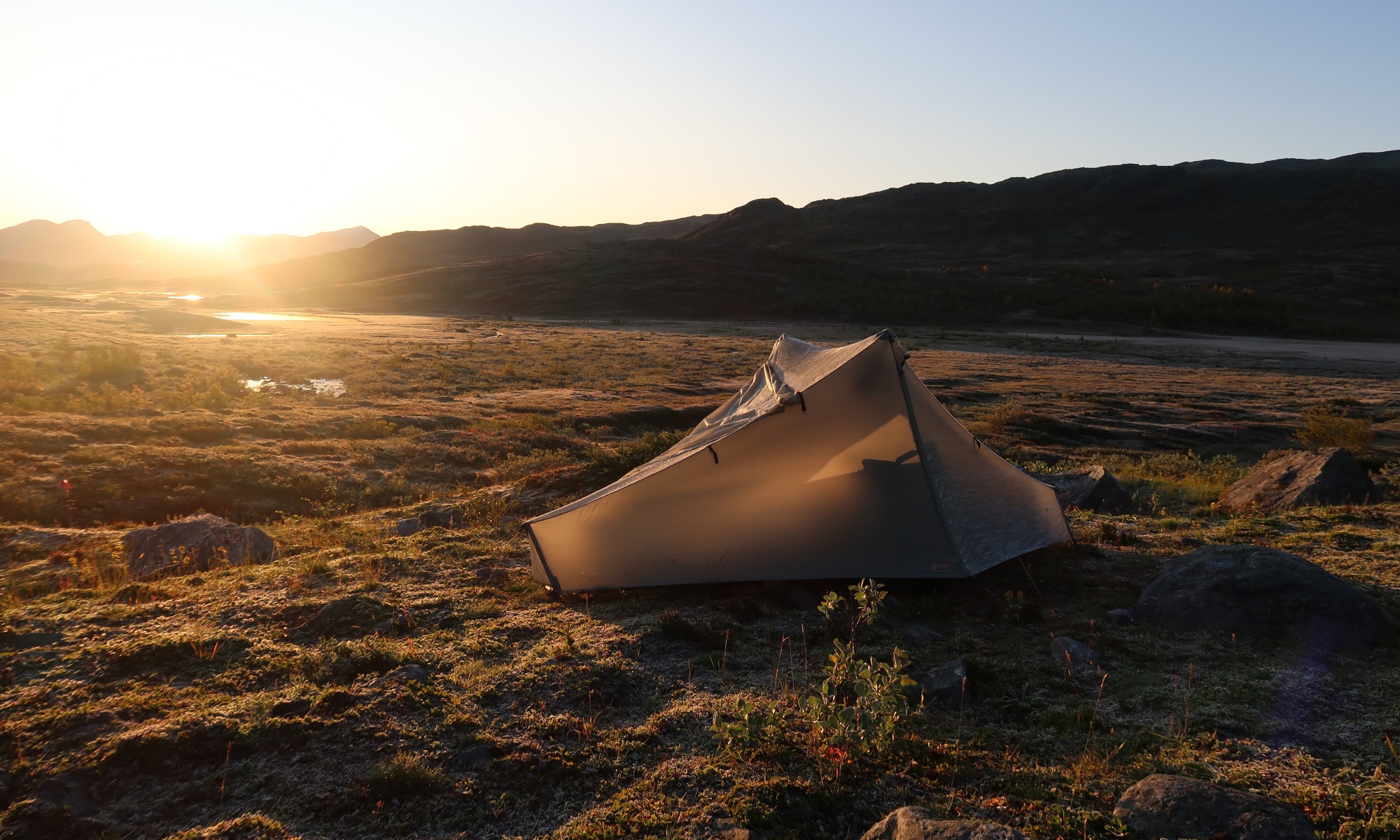 I slept really well through the night. There was frost on the tent fly and the top of my quilt was slightly moist where I have breathed onto it. I just packed it away as it was and it dried out quickly later on when I arrived at Alesjaure. I unattached the inner tent and packed it in my backpack. I found out later, when I pitched the Notch in the afternoon at Alesjaure, that the inner has to be attached again before you setup the outer fly. Otherwise you don’t get a correct pitch and everything is out of shape. This was the first time in the 4 years, since I have owned the Notch, that I have done this. I just wanted the inner to stay dry. Wanting to get moving quickly I just wrapped up the outer tent fly and stowed it into one of the side net pockets to “drip dry”.

The morning views were just as magnificent as yesterdays and the sun greeted me for the 2nd day in a row 😎. The sunrise was gorgeous. Looking towards Abiskojaure, the sun’s rays beamed down through my Tarptent Notch.

When I reached Unna Allagas, which was only 1.4 km away, I was pleased to be able to dump some garbage that I had been carrying for nearly 3 days. The views nearly took my breath away … boy, it sure was beautiful there. I had a nice chat to the only two guests that had stayed there the night before, a German couple, and then I started my first climb for the day.

I climbed east to 780 meters after leaving Unna Allagas up to Stuor Allagas passing first lake Allakasjaure. The trail then turned heading south-east and then over this collapsed footbridge below around 2.7 km from last nights camp.

Before the next steep climb there was a long board walk in a very wet area. The planks were slippery with the frost where the sun hadn’t melted the ice yet. You had to choose between falling on your butt because of the ice on the boards or opting for the safer choice of walking in the soggy waterlogged slop to the sides of the boards. I opted for option number two and found that I could find some areas that were slightly risen and not so wet and muddy.

After the board walk and still heading south-east there is a steep climb. From the 3.8 km mark I climbed from 785 meters and up to 958 meters at the 5 km mark. I climbed 175 m in just 1 km. I only had my base layer on with the sleeves rolled up but I baked in the morning sun. The climb was steep and the going was slow however, the view was very rewarding at the top. I stopped for a breather and downed an oatmeal bar while I took in the views.

From here the terrain then levelled out until I reached the lake at the base of Allespuolta, where I took my lunch break. Heading south now the winds really started to blow from the south-west and they felt ice cold. I had to put on my wind jacket (rain jacket – 2 uses) and use my hood on my base layer to keep my head warm.

At lunch time from the lake at the base of Allespuolta, I sent a message home from my inReach saying that I was okay (see image below).

I had another water crossing at the base of the next climb at Allespuolta where I could manage this time by rock hoping and didn’t even get my shoes wet. I stopped for some lunch and filled up with water. The winds were howling through up there and with the icy winds the temperatures dropped. From the top of the last climb to here was 3.5 km and I climbed a further 75 meters to 1028 meters.

After lunch I started my ascent of Allespuolta. The climb was also fairly steep and slow going for this old guy 🤣, no switchbacks here. At the 10.3 km mark I reached the top at 1243 meters height . From the lake, where I had lunch, to the summit is 1.8 km. This part of the trail for the next 1.5 km has a lot of rocks and you should be competent in navigating as the wavers and cairns are sporadic.

It was quite chilly on the top and the trail was difficult to navigate. Lots of rocks too, did I mention that? 😂. I really had to search for the cairns and sometimes they completely disappeared. I just kept a heading which would take me to Alesjaure and soon I picked up the trail again and some cairns began to pop sporadically up as well.

There was a long 5 km descent to the junction at Kungsleden from 1243 meters down to 827 meters height. Eventually I glimpsed my first views of Alesjaure. I recognised the valley immediately as I had visited here on my 2018 Kungsleden hike.

About 1 km from the Kungsleden junction I passed another hiker on his way up. He asked me what the going was like on the way up. To be more precise he asked if it was far now to the top. It was already late in the afternoon and I was glad to see Alesjaure and I was looking forward to stopping for the day. I told him that the going was slow, tough and a little difficult to navigate at times. I said to him that I wouldn’t think that he would make it to Unna Allagas by nightfall. He had a hefty backpack and he was walking slow. He replied that he had a tent so he would just walk until he couldn’t continue and then pitch where ever he was for the night. I told him that I hoped his tent could set-up without stakes because there was only rock everywhere.

I passed through Alesjaure last year which was one of my favourite locations on Kungsleden. It was great to dump some more garbage off at the hut and the beer and chips I downed were well deserved. I left the hut, crossed the bridge and found a nice spot for camp no. 3 further south away from the masses all on my own with nice views of the mountains.

Dinner consisted of beef with potato and Béarnaise sauce.

At 16:31 pm I sent a message out from my inReach letting everyone know that I was fine and that I would be camping here tonight. The message also contained my location (see image below).

You can view and downloaded my map here on AllTrails

End of day three … to be continued

This site uses Akismet to reduce spam. Learn how your comment data is processed.